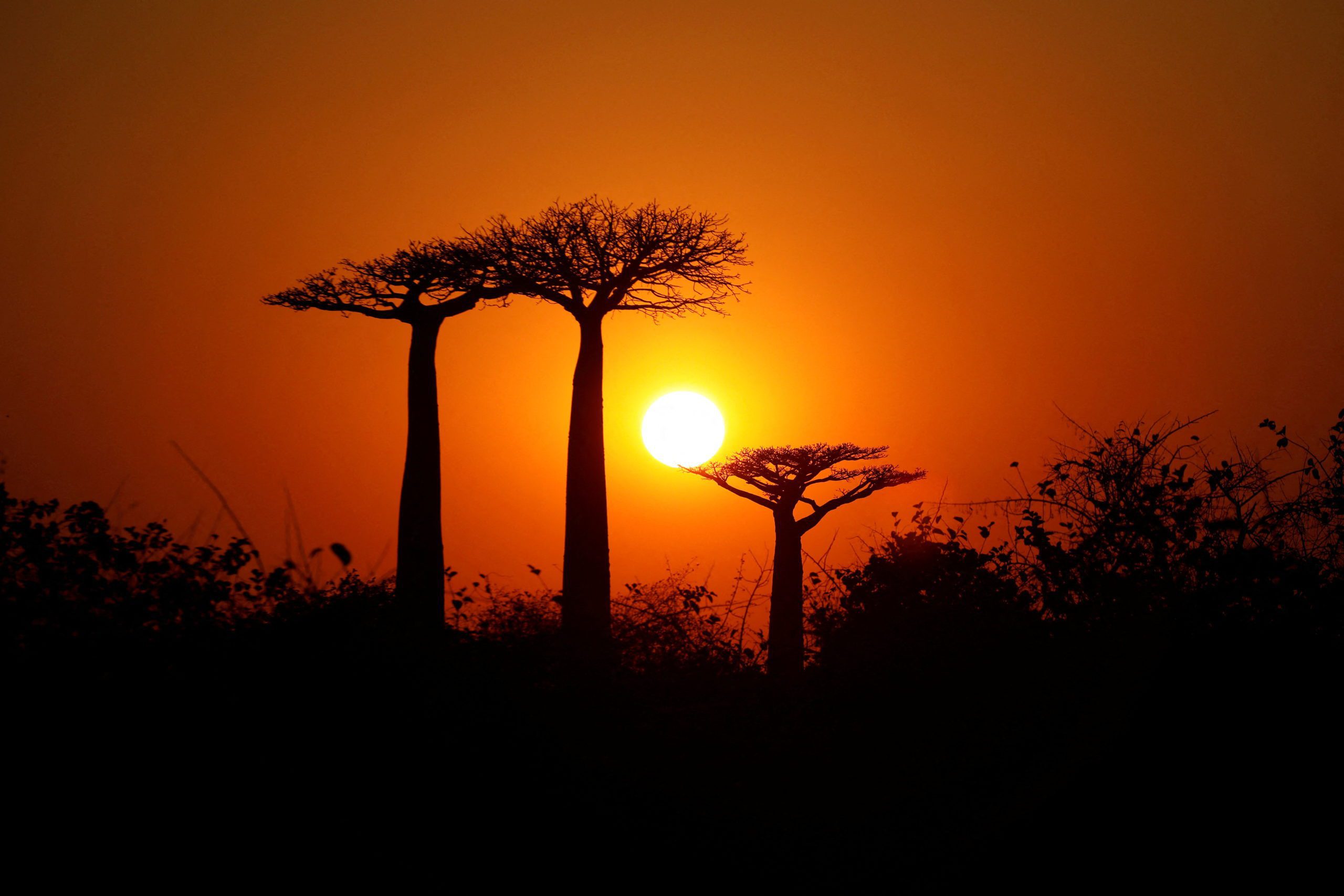 The sun rises behind Baobab trees at Baobab alley near the city of Morondava, Madagascar, August 30, 2019. REUTERS/Baz Ratner Fall foliage is reflected in the water at Walden Pond in Concord, Massachusetts October 14, 2009. REUTERS/Brian Snyder A tourist watches birds in the top of a canopy at the Manu Biosphere Reserve in Peru’s southern Amazon region of Madre de Dios November 2, 2009. REUTERS/Enrique Castro-Mendivil Pine trees are pictured on the International Day of Forests in the Landes forest near Le Pyla, France March 21, 2019. REUTERS/Regis Duvignau A man takes pictures of trees covered with hoarfrost and snow in a forest on the bank of the Yenisei River, with the air temperature at about minus 32 degrees Celsius (minus 25.6 degrees Fahrenheit), near the Siberian city of Krasnoyarsk, Russia December 6, 2018. REUTERS/Ilya Naymushin

WASHINGTON (Reuters) – From the monkey puzzle tree of Peru to the Tasmanian blue gum of Australia, from the baobabs of Madagascar to the giant sequoias of California, the world is blessed with an abundance of tree species. How many? A new study has the answer.

Researchers on Monday unveiled the world’s largest forest data base, comprising more than 44 million individual trees at more than 100,000 sites in 90 countries – helping them to calculate that Earth boasts roughly 73,300 tree species.

That figure is about 14% higher than previous estimates. Of that total, about 9,200 are estimated to exist based on statistical modeling but have not yet been identified by science, with a large proportion of these growing in South America, the researchers said.

South America, home to the enormously biodiverse Amazon rainforest and farflung Andean forests, was found to harbor 43% of the planet’s tree species and the largest number of rare species, at about 8,200.

Trees and forests are much more than mere oxygen producers, said Roberto Cazzolla Gatti, a professor of biological diversity and conservation at the University of Bologna in Italy and lead author of the study published in the journal Proceedings of the National Academy of Sciences.

“Without trees and forests, we would not have clean water, safe mountain slopes, habitat for many animals, fungi and other plants, the most biodiverse terrestrial ecosystems, sinks for our excess of carbon dioxide, depurators of our polluted air, et cetera,” Gatti said.

“Indeed, our society often considers forests as just pieces of wood and trees as natural resources, ignoring their fundamental role for humankind in providing ecosystem services that go behind the mere economic – even if important – timber, paper and pulp production. From trees and forests humanity gets inspiration, relaxation, spirituality and essentially the meaning of life,” Gatti added.

“By establishing a quantitative benchmark, our study can contribute to tree and forest conservation efforts,” said study co-author Peter Reich, a forest ecologist at the University of Michigan and University of Minnesota.

“This information is important because tree species are going extinct due to deforestation and climate change, and understanding the value of that diversity requires us to know what is there in the first place before we lose it,” Reich said. “Tree species diversity is key to maintaining healthy, productive forests, and important to the global economy and to nature.”

This study did not tally the total number of individual trees globally, but 2015 research led by one of the co-authors put that figure at about 3 trillion.

The new study pinpointed global tree diversity hot spots in the tropics and subtropics in South America, Central America, Africa, Asia and Oceania. It also determined that about a third of known species can be classified as rare.

The researchers used methods developed by statisticians and mathematicians to estimate the number of unknown species based on the abundance and presence of known species. Tropical and subtropical ecosystems in South America may nurture 40% of these yet-to-be-identified species, they said.

“This study reminds us how little we know about our own planet and its biosphere,” said study co-author Jingjing Liang, a professor of quantitative forest ecology at Purdue University in Indiana. “There is so much more we need to learn about the Earth so that we can better protect it and conserve natural resources for future generations.”