A gunman who took four people hostage at a Dallas-area synagogue and was himself killed as federal agents stormed the temple was identified on Sunday as a British citizen, while police in England said they had detained two teenagers for questioning in the investigation. Dhruv Tikekar reports. 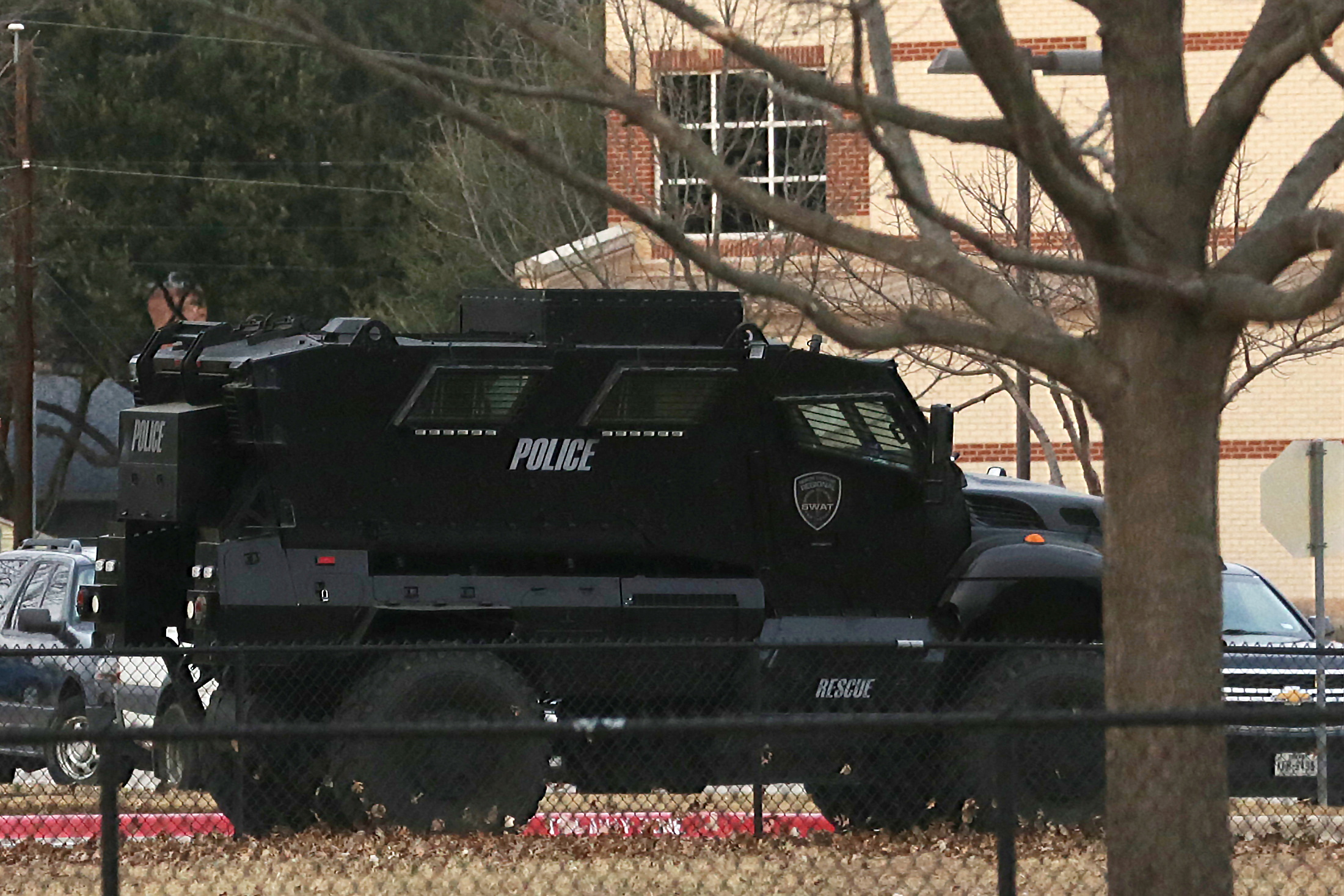 A law enforcement vehicle is parked at a school in the area where a man believed to have taken people hostage at a synagogue during services that were being streamed live, in Colleyville, Texas, U.S. January 15, 2022. REUTERS/Shelby Tauber

(Reuters) -A gunman who took four people hostage at a Dallas-area synagogue and was himself killed as federal agents stormed the temple was identified on Sunday as a British citizen, while police in England said they had detained two teenagers for questioning in the investigation.

The daylong siege at the Congregation Beth Israel synagogue in Colleyville, about 16 miles northeast of Fort Worth, Texas, ended in gunfire Saturday night with all four hostages released unharmed and with the suspect dead. It was not clear whether the gunman took his own life or was slain by members of the FBI hostage rescue team.

During 10 hours of tense hostage negotiations conducted by authorities on either side of the Atlantic with help from the gunman’s family, the suspect was reported to have demanded the release of a Pakistani-born scientist serving a federal prison sentence in the Dallas-Forth Worth area.

The FBI on Sunday identified the suspect as Malik Faisal Akram, 44, a citizen of the United Kingdom but did not say how or when he entered the United States.

Akram’s brother Gulbar posted on Facebook that the suspect, from the industrial town of Blackburn in the north of England, suffered from mental illness and said relatives had spent all night at a Blackburn police station “liaising with Faisal, the negotiators, FBI etc.”

“There was nothing we could have said to him or done that would have convinced him to surrender,” Gulbar wrote on the Blackburn Muslim Community’s Facebook page.

He said the FBI was due to fly into the UK “later today,” saying that the family as a result could say little more.

“We would like to say that we as a family do not condone any of his actions and would like to sincerely apologize wholeheartedly to all the victims involved in the unfortunate incident,” the brother wrote.

Later on Sunday in England, the Greater Manchester Police issued a statement saying officers from Counter Terror Policing North West “have made two arrests in relation to the incident” in Texas, adding that the two teenagers detained “remain in custody for questioning.”

U.S. President Joe Biden, who was in Philadelphia with first lady Jill Biden for a visit commemorating the birthday of slain civil rights leader Martin Luther King Jr., called the hostage-taking “an act of terror.”

“Allegedly – I don’t have all the facts, nor does the attorney general – but allegedly the assertion was he got the weapons on the street,” Biden said.

“He purchased them when he landed and it turns out there apparently were no bombs that we know of. … Apparently he spent the first night in a homeless shelter.”

Saturday’s siege began in late morning, disrupting Sabbath services as the suspect took the rabbi and three other people hostage. One hostage was released unharmed after six hours and the remaining three were freed later either shortly before or during the raid by the FBI’s hostage rescue team.

SWAT teams from the Colleyville Police Department initially responded to the scene, and FBI agents arriving afterward opened contact with the suspect, who said he wanted to speak to a woman held in a federal prison.

The man, who had seemed to be carrying on a one-sided phone conversation during a Facebook livestream of the service, could be heard ranting and talking about religion and his sister, repeatedly saying he did not want to see anyone hurt, the Fort Worth Star-Telegram reported.

The hostage-taker claimed to be the brother of Pakistani neuroscientist Aafia Siddiqui, who is serving an 86-year federal prison sentence on a 2010 conviction for shooting at soldiers and FBI agents, and demanded that she be freed, a U.S. official told ABC News.

Siddiqui is being held at a federal medical lockup in the Fort Worth area. A lawyer representing Siddiqui, Marwa Elbially, told CNN in a statement that the man was not Siddiqui’s brother and Siddiqui’s family condemned his “heinous” actions.

Colleyville Police Chief Michael Miller told reporters late on Saturday that investigators had no immediate information “that indicates this is part of any ongoing threat.”

“We do believe from our engagement with this suspect that he was singularly focused on one issue, and it was not specifically related to the Jewish community,” Miller added.

Although the Texas hostage situation appeared to be an isolated incident, synagogues in New York and elsewhere around the country ramped up security in response and officials condemned anti-semitic acts.

“What happened yesterday at Congregation Beth Israel is a reminder that we must speak up and combat antisemitism and hate wherever it exists,” U.S. Vice President Kamala Harris said in a statement. “Everyone has a right to pray, work, study, and spend time with loved ones not as the other – but as us.”

In his Facebook post, Akram’s brother, who also mentioned the death of a younger sibling “barely three months ago,” said the family’s priority is to have Akram’s body returned to the UK “for his Funeral prayers although we have been warned it could take weeks.”