A batch of dome-shaped ice volcanoes have been identified on Pluto using data from NASA’s New Horizons spacecraft, showing that this remote frigid world is more dynamic than previously known. 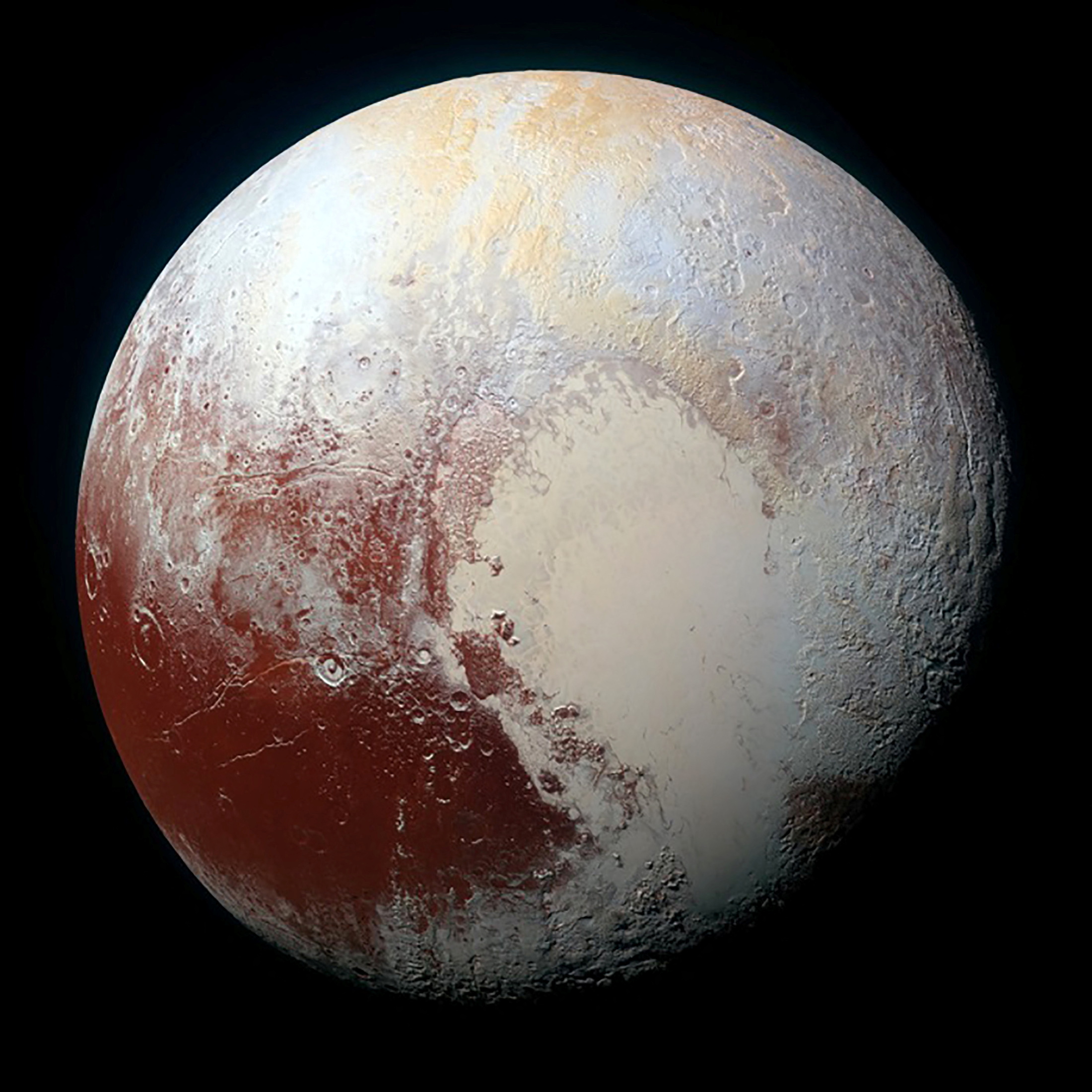 FILE PHOTO: A heart shaped region named Sputnik Planum is seen in an enhanced view of Pluto in an undated image from NASA’s New Horizons spacecraft, which flew past the dwarf planet in 2015. REUTERS/NASA/JHUAPL/SwRI/Handout via Reuters

WASHINGTON (Reuters) – A batch of dome-shaped ice volcanoes that look unlike anything else known in our solar system and may still be active have been identified on Pluto using data from NASA’s New Horizons spacecraft, showing that this remote frigid world is more dynamic than previously known.

Scientists said on Tuesday that these cryovolcanoes – numbering perhaps 10 or more – stand anywhere from six-tenths of a mile (1 km) to 4-1/2 miles (7 km) tall. Unlike Earth volcanoes that spew gases and molten rock, this dwarf planet’s cryovolcanoes extrude large amounts of ice – apparently frozen water rather than some other frozen material – that may have the consistency of toothpaste, they said.

Features on the asteroid belt dwarf planet Ceres, Saturn’s moons Enceladus and Titan, Jupiter’s moon Europa and Neptune’s moon Triton also have been pegged as cryovolcanoes. But those all differ from Pluto’s, the researchers said, owing to different surface conditions such as temperature and atmospheric pressure, as well as different mixes of icy materials.

“Finding these features does indicate that Pluto is more active, or geologically alive, than we previously thought it would be,” said planetary scientist Kelsi Singer of the Southwest Research Institute in Boulder, Colorado, lead author of the study published in the journal Nature Communications https://www.nature.com/articles/s41467-022-29056-3.

“The combination of these features being geologically recent, covering a vast area and most likely being made of water ice is surprising because it requires more internal heat than we thought Pluto would have at this stage of its history,” Singer added.

Pluto, which is smaller than Earth’s moon and has a diameter of about 1,400 miles (2,380 km), orbits about 3.6 billion miles (5.8 billion km) away from the sun, roughly 40 times farther than Earth’s orbit. Its surface features plains, mountains, craters and valleys.

Images and data analyzed in the new study, obtained in 2015 by New Horizons, validated previous hypotheses about cryovolcanism on Pluto.

The study found not only extensive evidence for cryovolcanism but also that it has been long-lived, not a single episode, said Southwest Research Institute planetary scientist Alan Stern, the New Horizons principal investigator and study co-author.

“What’s most fascinating about Pluto is that it’s so complex – as complex as the Earth or Mars despite its smaller size and high distance from the sun,” Stern said. “This was a real surprise from the New Horizons flyby, and the new result about cryovolcanism re-emphasizes this in a dramatic way.”

An elevation called Wright Mons, one of the tallest, may have formed from several volcanic domes merging, yielding a shape unlike any Earth volcanoes. Although shaped differently, it is similar in size to Hawaii’s large volcano Mauna Loa.

Like Earth and our solar system’s other planets, Pluto formed about 4.5 billion years ago. Based on an absence of impact craters that normally would accumulate over time, it appears its cryovolcanoes are relatively recent – formed in the past few hundred million years.

“That is young on a geologic timescale. Because there are almost no impact craters, it is possible these processes are ongoing even in the present day,” Singer said.

Pluto has lots of active geology, including flowing nitrogen ice glaciers and a cycle in which nitrogen ice vaporizes during the day and condenses back to ice at night – a process constantly changing the planetary surface.

“Pluto is a geological wonderland,” Singer said. “Many areas of Pluto are completely different from each other. If you just had a few pieces of a puzzle of Pluto you would have no idea what the other areas looked like.”